This section contains our news roundups, press releases and comment pieces. The latest piece is always at the top, scroll down to see the older pieces or use the links below. Click the ‘Back to top’ links to get back up here.

Minister writes to Commission of Investigation to ask if deleted testimonies can be retrieved; fears Commission members may resign if asked to stay on

The Irish Times reports today that Minister for Children Roderic O’Gorman has written to Judge Yvonne Murphy, chairwoman of the Commission to ask if the recordings which were destroyed by the Commission could possibly be retrieved.

“In a letter to Judge Yvonne Murphy, chairwoman of the commission, Mr O’Gorman asked if “with the assistance of specialist technical expertise, it may be that personal data may be retrieved from any source, including the server or from backup copies that may have been made”.”

“The Minister told Judge Murphy that clarification on whether or not information could be salvaged “would be hugely helpful in informing how I intend to proceed to give effect” to his obligations.

The chairwoman had not responded to the Minister’s letter at the time of publication of the story. The Commission is scheduled to dissolve in twelve days.

The Minister was asked when he had first become aware that the recordings had been destroyed by the Commission when he appeared before the Joint Committee on Children, Disability, Equality and Integration. His response was that he had first learned of the destruction of the testimony when he read the Commission’s final report. The final report was delivered to the Minister on the 30th October 2021.

Meanwhile the Irish Examiner reports that there are “serious fears that the members of the Mother and Baby Home Commission will resign en masse if its term is extended to allow for an investigation into the destruction of witness testimony.”

“The commission has yet to respond to the minister, and has also refused to come before the Oireachtas committee on children to answer questions, claiming it would not be appropriate for them to engage with the committee.

There are now concerns in Government that the commission would take the view that they have fulfilled their obligations and would resign if their term is extended beyond February 28, when it is due to be wound up.”

In a statement on the Report of the Commission into the Mother and Baby Homes released today the Irish Association of Social Workers apologised unreservedly for the pain and distress caused by the failings of social work and committed to both learn from and stand with survivors.

The full statement is below.

“The Irish Association of Social Workers apologises unreservedly for the pain and distress caused by the failings of social work, outlined in the Report of the Commission into the Mother and Baby Homes. The report provides examples of times when the social work profession did not provide compassionate support, failed to uphold basic human rights, and failed to challenge the social and institutional injustices, which caused such devastation in the lives of women and children. We have heard the powerful and brave testimonies of the survivors. The IASW will now reflect on how we can best respond to what we have learned and continue to learn from the survivors.

‘IASW Statement on Report of the Commission into the Mother and Baby Homes’, Irish Association of Social Workers, 15th February 2021

The Clann Project is in the process of contacting the witnesses who spoke to it between 2015 and 2018 with a view to publishing their statements anonymously. “These witness statements came from adopted people, mothers, relatives and others who experienced institutional abuse and/or the injustice of Ireland’s closed, secret, forced adoption system.”

The first selection of witness statements is available now on the Clann Project website.

“The vast majority of Clann Project witnesses contacted so far have generously consented to their anonymised statements and supporting documents being made available. We are extremely grateful to all of the witnesses who have shared their experiences. In doing so, they have made an invaluable contribution to our collective understanding of how girls and women who became pregnant outside marriage, and their children (now adults), were and are treated in Ireland.”

We’ll possibly add some extracts from these statements to our ‘Stories’ page over the next while.

On Wednesday 3rd February The Irish Examiner reported that Minister for Children Roderic O’Gorman had contacted the Commission of Investigation to seek clarity around the treatment of records of witness testimony. The same newspaper reported on Saturday 30th January that the Commission of Investigation had deleted the audio recordings of all testimony given to its Confidential Committee.

The Examiner also reported on Tuesday 2nd February that the Data Protection Commission has written to the Commission of Investigation seeking answers about the circumstances surrounding the destruction of these recordings.

“A spokesperson for the DPC said the body “has written to the commission with a number of questions around the deletion, and the legal basis for the deletion, of these records. We are awaiting their response”.”

The Minister has been in touch with both the Commission of Investigation and the Data Protection Commission.

“Mr O’Gorman has also met with the Data Protection Commissioner to discuss this issue, and to ensure robust processes are in place for the management of the commission archive when it transfers to the department.”

The Journal has more reporting on this. The Department of Children is not answering queries about the Commission of Investigation and is referring journalists to the Commission itself. The Commission is refusing to answer questions.

“When asked by TheJournal.ie about the destruction of the audio recordings, a spokesperson for the Department of Children said it was “a matter for the commission”.

At the time of publication, the commission had not replied to a request for comment.”

Minister for Children confirms in a letter to Thomas Pringle T.D. that the GDPR applies to the archive of the Mother and Baby Homes Commission of Investigation

In response to a question from Thomas Pringle T.D. the Minister for Children, Equality, Disability, Integration and Youth has confirmed in writing that the GDPR applies to the Commission of Investigation’s archive.

The Minister also confirmed that the GDPR takes precedence over any conflicting domestic law.

“More generally, I can assure the Deputy that, as a regulation, the GDPR is directly applicable and it did not require transposition into Irish law. … While Irish law must be interpreted in line with EU law to the extent that it is possible to do so, in case of conflict, EU law would prevail over any inconsistent domestic law in accordance with the principle of primacy of EU law.”

The letter was posted by Deputy Pringle on Twitter and is reproduced below. We assume the date 21st January 2012 is supposed to read 21st January 2021. 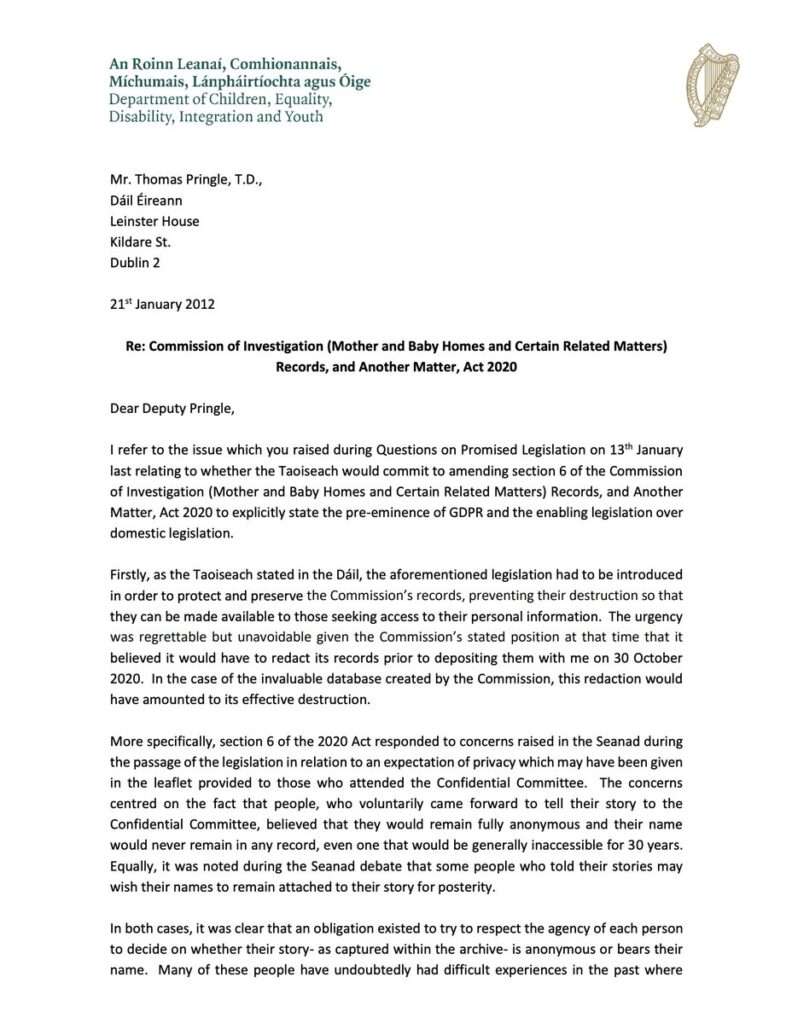 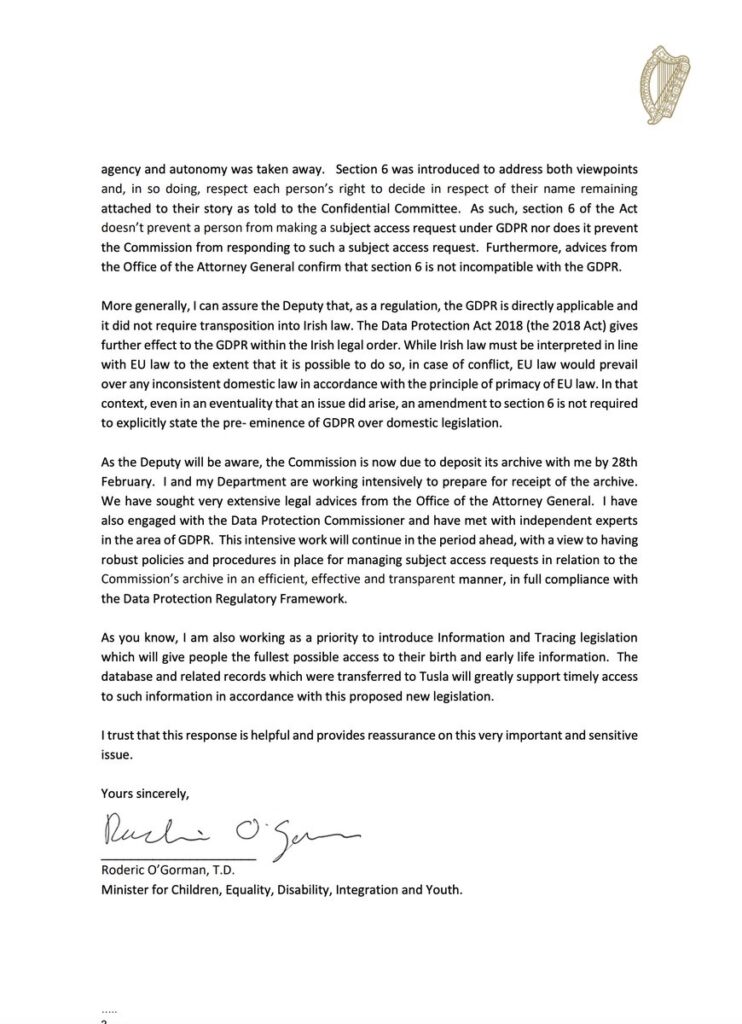 All content on this site and in the downloadable guides is published under a Creative Commons licence (CC BY-NC-ND 4.0) except if otherwise noted. You are free to copy and redistribute the material as long as you give appropriate credit, you do not use the material for commercial purposes, and you do not change the material.